An unconventional representation of migrants through a symbolic act of rescue and re-appropriation of photographs
and personal belongings lost or discarded by migrants after their arrival at Lesbos, Greece.

In late 2015 I spent several weeks following the migration crisis along the Balkan route.
In Lesbos I decided to step away from the pack. I felt there was an homogeneous and glamorized approach to the subject.
I preferred to search the story away from the hustle and chaos, where silence reigns and the dust settles. I began to stumble
upon an incredible amount of family snapshots, passport photos and personal belongings either lost or discarded by migrants.
I photographed them in the immediate vicinity of the discovery as a symbolic act of rescue.
Each picture is an evidence of the life they had before fleeing for their lives. That life that once seemed unbreakable.
The images keep their mystery, they will never tell the real story that instead runs away with their owners, but they are capable
of creating an emotional impact and bringing a reflection that goes far beyond what they show. 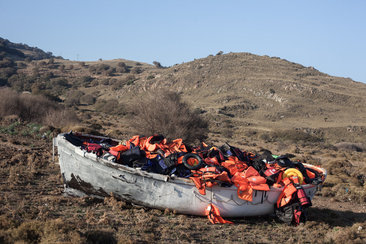 > All images are protected by copyright ©Francesco Giusti
Made with Viewbook