The Greek island of Lesbos, only six-mile sea crossing from Turkey, has been the single largest European recipient of new migrants
in 2015. Asylum seekers, refugees and so-called ‘economic migrants’ (mainly coming from Syria, Afghanistan, Iraq – but elsewhere, too) land on the island each day and night fleeing war and dictatorial regimes in search of a new life and opportunities.
In front of this huge and apparently unstoppable flow of migrants, the media coverage has been capillary. In Lesbos photographers, videomakers, Tv and media journalists are omnipresent with tripods on the beaches at every boat arriving; but too often the representation that is given is repetitive and homogeneous. Today’s hyper production of images related to the tragedies that affect the Mediterranean Sea have generated a sense of inurement in the public opinion. I decided to step away from the media circus
that overtook the island and walking around day by day I started to find and collect an amazing amount of family album snapshots, ID passport pictures and personal belongings (letters, documents, objects) that were lost or discarded by the migrants upon their arrival. The photographs and personal items that I found gave me the chance to break the codes of representation commonly used by the medias when dealing with the migration crisis.I found them along the northern rocky shores, among the vegetation or on
the dusty roads that migrants walk to reach the nearest refugee camp; and I photographed them in the place of the discovery and
on the surfaces available in the immediate vicinity.
Unfortunately I never met the people who appear in the photographs. Each picture is an evidence of the life they had before fleeing for their lives. That life that once seemed unbreakable. The images keep their mystery, they will never tell the real story that instead runs away with their owners. However, these random fragments of reality leave room for the imagination, giving us the ability to assign a new story. I hope that the emotional impact that those images arouse, leads us to reflect on the essence, the reasons and the consequences of every conflict. The images can bring a reflection beyond what they show. Each photograph that I found has been like a unique treasure that asked to be brought back to life through a symbolic act of rescue. A common rescue.
And each denied rescue is a common failure. 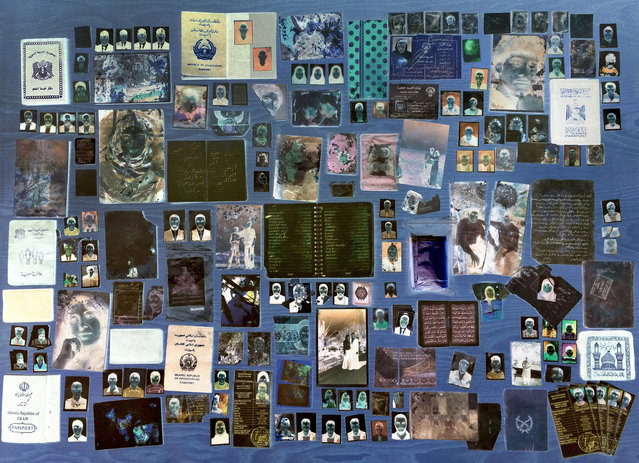 All Images © Francesco Giusti
Made with Viewbook